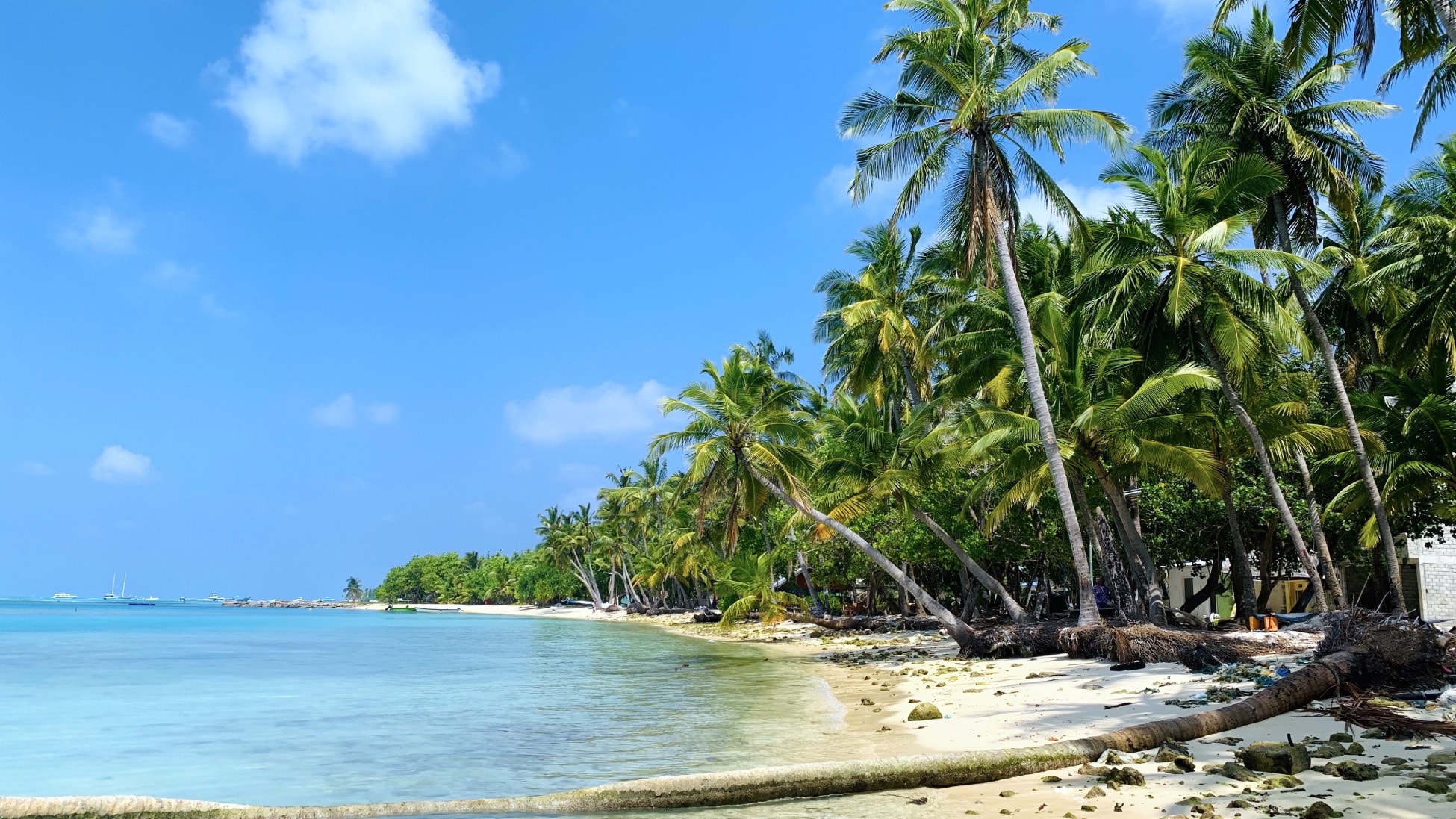 The Maldives on a budget

5 of my best tips! & some practical info

The Maldives on a budget

5 of my best tips! & some practical info

Thinking of the Maldives, I always figured it to be an expensive paradise place. My story and which islands we visited you can read here. But for the practical info about visiting the Maldives, you are in the right spot. Here I will share how we managed to travel so cheap and share some more things you should know before visiting.
Some luck, some choices we made and meeting up with the locals made us only spent 370 euros at this paradise.

It may be feeling as a luxury destination, but we managed to spend only 370 euros each, for 11 whole days and ten nights. This is excluding the flight ticket.

I had a one-way ticket, from the Netherlands, for 300 euro’s, continued to Asia after this.
My friend had a return ticket, from Germany, for 575 euro.

So how did we do that?

Local islands: Islands owned by the country and local people, not the ones owned by a resort, the so-called ‘private islands’.

This beauty you can find anywhere but the price you pay on a private island for your hotel and food is so much higher!

Sleep: The magic word is Couchsurfing! We only paid for three nights in a hotel, all the other nights we got for free from lovely local people.

But the few hotels we booked were not expensive as well, around 40 euros a night. We arranged our sleeping place only one day before. Go together is the best tip I can give you on saving money here. You always pay for two people so better if you can share it.

Our thinking about hotels was, we are here to sleep and outside in the daytime so if it has good references and is hygienic it is good for us, we don’t need luxury.

With Couchsurfing you also have to be a bit lucky, sometimes it doesn’t work out, we had evenings that we didn’t know where to sleep until 8 pm or so. I can tell you then it doesn’t feel that nice, but in the end, you can always book a hotel.

Food: Prices are different on each island, a place like Malé, which is a city everything is cheaper. Here ones we even cooked dinner ourselves because we found a ‘big’ supermarket.
Mostly we had dinner in local restaurants; they are often delicious and quite cheap! Some islands you can not choose, because simply there isn’t that much.

At Dhiffushi and Thulusdhoo we ate in a little bit more luxurious places. Worth every penny.

Same counts for breakfast and lunch, just look for a place not, especially for tourists. With the hosts we had from Couchsurfing we were also lucky, some also arranged breakfast for us. One time we got even some lunch when we arrived.

Transport: Another keyword is local transport. From the airport, we took the ferry to Malé, which costs 1 dollar and if you pay in Maldivian currency, you pay even less. It goes around every 10 minutes. A lot cheaper than a taxi, for example.

The long distances between the islands we did mostly by local ferry, it is around 5 dollar for a ticket a person, and it stops along several islands on the route.

In between islands that were close to each other we took the speedboat. For only 5 minutes on the speedboat, you will also pay 5 dollars each.

Local ferries are a lot cheaper but also a lot slower. For example, Malé to Thulusdhoo is around 2,5 hours to get there with the local ferry, cost 5 dollars.
The way back we took the speedboat is 30 dollars each, but only took 30 minutes.

Another pre for a speedboat is it goes more often, the local ferry goes ones a day and not even every day.

Check this website for the ferry schedules, it looks chaos, but after a couple of days, I found out how it works and was able to check all the times.

Activities: We did a lot, but most of it was free. On each island, we explored the place. Walked around, enjoyed the sunset, tried out some beaches, swam in the sea.

It was not that we didn’t want to spend money on activities, but first, not all islands have a lot of paid excursions, and second, there was simply no need for us to do something else than what we did, enjoying that beautiful place.

We booked full-day tour at Maafushi with Shadow Palm, and it costs 50 dollars each including water and lunch with some fruit juice (they also provide vegetarian lunch).

And with an additional 20 dollars for taking drone pictures. Out of a pity that I got bitten (see my story about the Maldives), we got the pictures for free. As I said, sometimes some luck helps…

Some advice: Bring your snorkelling gear or just some simple goggles with you. Every place where you can swim the underwater life is great to witness and not everywhere you can hire equipment plus it saves money if you take your own.

Save money? Take the local ferry. Want to go fast? Take the speedboat.

What to know before going to the Maldives:

Visa: Do you need a visa? This is different for the country you are from, so check this before! But most people get a visa on arrival, which is valid for 30 days.

Vaccination: They require yellow fever, especially if you have been to a high-risk area of yellow fever. But to be sure check with your medical health centre for travel vaccinations. It also depends a bit from which country you are!

Best time to travel: According to the internet, November and April. The high season is between December and March, so quite crowded. But we went to Januari (high season), and most places still had a vacancy, and in my opinion, it was not full of tourists.

The rainy season is from May to October. The northern atolls have more rainfall than the southern atolls.

Water: You can not drink the water from the tap. So have a filter bottle with you or buy bottled water.

Wall outlets: type G, the same as in England. We mostly had this type of wall outlet and sometimes the ones where every charger fit in.

Online I read sometimes they have a different type, type D, I haven’t seen them anywhere but also haven’t been everywhere. Want to make sure yours fit, just take a world charger that can change and fit in all the outlets.

Food: On Malé, we found some ‘bigger’ supermarkets, on the other island where sometimes small convenient stores but not with many choices. There are restaurants on all islands where they have hotels so you can always find some food. Depends on the island how expensive they are.

Pre-Book? For the first night, it is best to book already that you don’t end up without a place. Everywhere else we arranged/booked the day before.

Money: Cash is the thing on the Maldives, everywhere they pay with cash. Important: On the smaller islands, there is not always an ATM so make sure you have enough cash with you, at hotels you can often pay with a credit card, not all foreign debit cards work. At the ATM you can get money out with your debit card.

Funny thing, you can also pay everywhere with US dollars, so take a few of those with you if you can’t pay with credit card and you don’t have cash anymore you can still pay. But make sure they are flawless—a tiny cut in the paper or old ones they don’t take.

More: It is an Islamic country, and so are the habits. Pay some respect by adapting to their culture wearing appropriate clothes is a big part of this. So cover your shoulders and legs at least until your knees, unless you are at a place where is written that bikini is fine.

There are one or more bikini beaches on almost every island, where you will get your satisfaction of sunbathing under that palm tree (watch out for falling coconuts).

This also means there is no alcohol served, if you really think this is important next to some bigger islands, like Maafushi are party boats where you can party and drink. You can also book a day tour to a private island and drink there. But you can also discover life-without-alcohol and just enjoy the beach with a mocktail.

And last but not least, Friday is their free day, so no public ferries on this day.

You can find my personal story about the Maldives here…