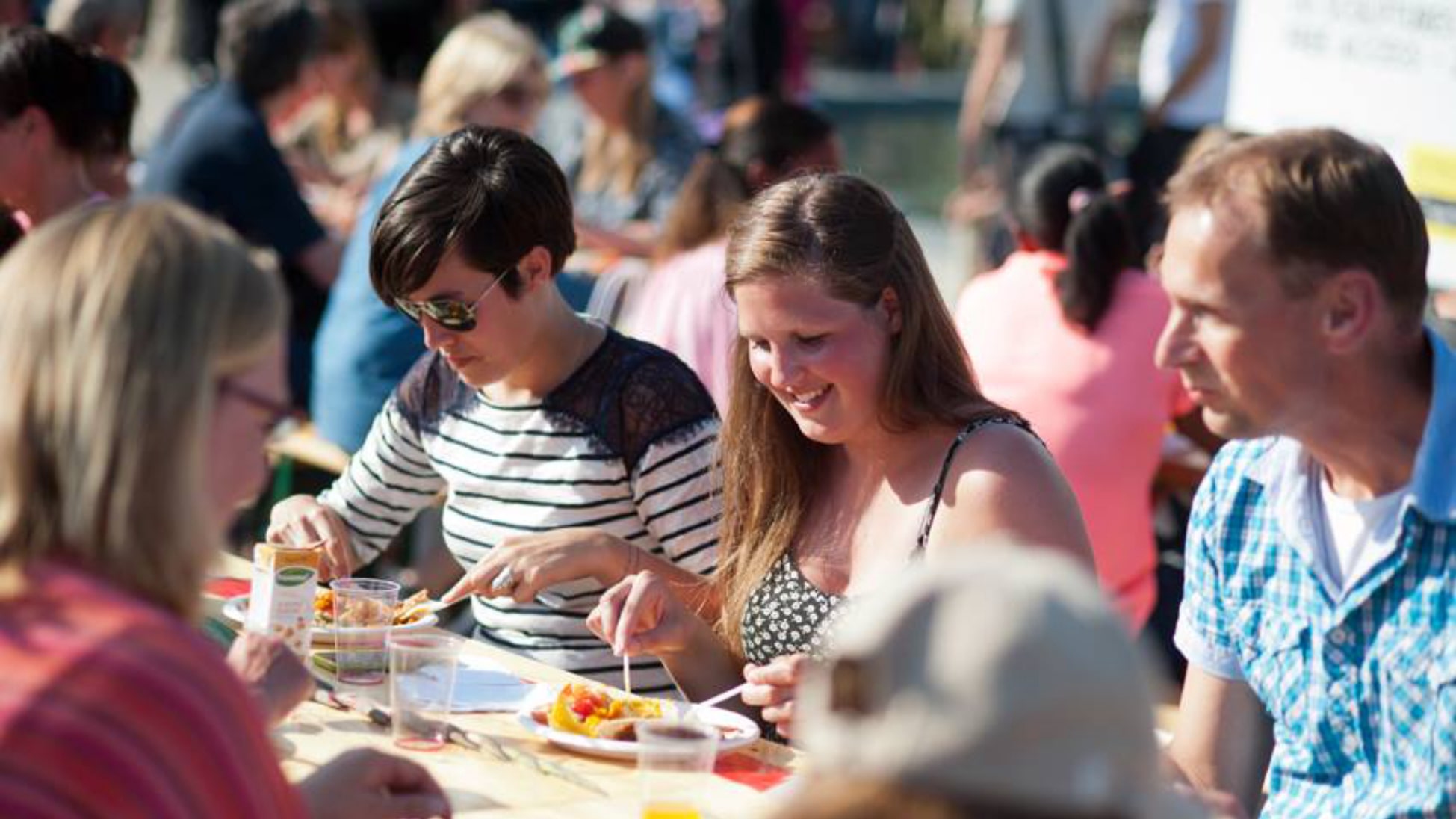 Good food, meeting new people and a lot of joy. That is how I would describe this event, the longest vegetarian table. It is a contest but also an event to make more people excited about vegetarian food.

Have you ever had dinner with almost 2000 people at the same time, at the same place? I didn’t, but it is a great experience.

In 2015 and 2016, I went to the event, 2015 was the first year I heard of the event; otherwise, I would have been there before. In 2016 I felt like an ultimate VIP, they used a picture they made in 2015 on all the flyers and posters, and my face was the main object in the middle of the photo. It felt weird but also made me feel exceptional, they choose my face! I saw myself all over the place. I had a few hours where I could experience how it feels when everybody recognizes you.

The Vegetarian union in the Netherlands organizes different events and projects. For example, ’30 Day Vega Challenge: learn to cook and eat vegetarian food’. They also held the event the longest vegetarian table, a few years in a row. In 2016 they broke the record with 1950 participants, who all dined together on one big square, al with an excellent vegetarian meal. It was the 6th time they organized this event.

A summer evening with the sun still warm, several long tables were standing on a big square and a few food points where you can go and get your plate with a delicious vegetarian meal.
Walk back, find a place to sit and eat, talk, laugh. A whole evening with hundreds of people.

Every year they make a great effort to create a delicious vegetarian meal, the first time I was there, we had Mexican cuisine; chilli, guacamole, pumpkin sauce and tomato salsa.
The second time it was a different cuisine, Mediterranean; vegetarian balls in the flavours beet, spicy and spinach. There was pasta pesto, an orange salad, a beet salad and a summer vegetable dish and as sauce tzatziki. Delicious!

Everyone is welcome, as I can remember you can come and join the event, but you did have to be on time. At a certain point, there is no food left. It is free, you can just show up and join.
I always signed up as VIP, to support the union and to be sure about my place and that there is food for me. (You have to pay a small fee for a VIP place, but they know before how many VIPs there are so they reserve food and a place for you).

Also, for not vegetarians, I can highly recommend this event. The feeling of togetherness, meeting lots of ‘random’ people who are all in for a friendly conversation and good food is the reason you want to be there. If you usually eat meat every meal, then this is a good and fun way to experience how a meal without meat can be.

Sadly last few years the event wasn’t on, because hosting and feeding so many people is also a challenge. They said to bring the event back someday but maybe in a slightly different way.

More about The Vegetarian Union in the Netherlands (Vegetariers Bond) go to their website here.
(It is in Dutch)

I am the one with sunglasses

I am the one with sunglasses

The difference between vegetarian and vegan:

Vegetarian: there is more kind of vegetarians, but most of the time when people speak about vegetarian they talk about ‘lacto-ovo-vegetarian’, they don’t eat meat or fish but do eat dairy and eggs.
For me personally, I don’t use products where an animal has to die for, like leather or meat.
But I do eat dairy and eggs, but always try to buy the organic or biodynamic version; there is more care for the animals.

5 Reasons why it is good to be a vegetarian or eat less meat: *

It has been scientifically proven that eating meals with a lot of meat is unhealthy. If you overeat meat you will have too many proteins; it contains lousy fat, and possibly you get too little dietary fibres.

Moreover, it has been proven that vegetarians generally suffer less from cardiovascular disease, diabetes mellitus and have lower body weight.

14.5% of greenhouse gas emissions are caused by livestock farming. That is more than global transport emissions.

Huge forest areas are cut down for pasture ground for the animals and fields for animal food. Because of the disappearance of so much forest, it means that less CO2 can be retained, so that more CO2 remains in the atmosphere. This also means that dozens of plant and animal species are disappearing due to deforestation.

3. For the seas and oceans;

Overfishing, it means that so much fish is caught in a specific area that the population is in danger of disappearing, causing the entire ecosystem to collapse. Scientific research has shown that fish do experience pain, fear and stress.

The animals in the coral reef have also disappeared for a while. The nets that drag over the bottom have irreversibly destroyed the coral and their living space. We need coral for our ecosystem.
With fishing, they also catch species they don’t want to catch, like dolphins, turtles, sharks, sea birds, other fish and marine animals get trapped in fishermen’s nets. According to the Food and Agriculture Organization of the United Nations, on average, 30% of the total catch is dumped dead or severely mutilated back into the sea.

The solution of farmed fish is not so much a solution; Most farmed fish is a carnivore, so they need to catch wild fish to feed it. To get 1 kilo of farmed fish you need between two and six kilos of wild fish food, even more for the larger species, such as tuna, this can amount to 20 kilos. So no solution at all; it makes it even worse.

In many cases, cattle breeding is an inefficient way to feed people. A lot of energy is lost in the conversion of vegetable food into animal food. It is generally less wasteful to consume cereals directly than to use them as animal food. The example I read to explain this easily; ‘Suppose a pig eats five loaves of bread per day, it will use the energy from four of those loaves to, for example, make its heart pump, move, and digest other food. One bread remains, and that is converted into meat. If we had not used the pig as a “detour,” many more people would have been able to eat from all the bread that the pig has consumed in its lifetime.’ So the quantity of food we could eat if we eat it directly is much more than the amount of meat we can eat.

5. The last important point: For the animals themselves;

The animals that we slaughter for our consumption have had a miserable life in the bio-industry often; Such as broiler chickens that have to grow so fast in 6 weeks that they can’t stand anymore. The animal’s natural needs are not met, which causes animals to show all kinds of stress and unnatural behaviour. Often their lives are accompanied by a lot of suffering, and they are slaughtered in horrible ways. I will save you the details but when in doubt there are a lot of documentaries to be found. We, as human beings, cannot ignore that these atrocities still take place.

* Most of this information comes from the Dutch Vegetarians Union website.

Do you like to try some vegetarian recipes? Go to my recipe page and enjoy.